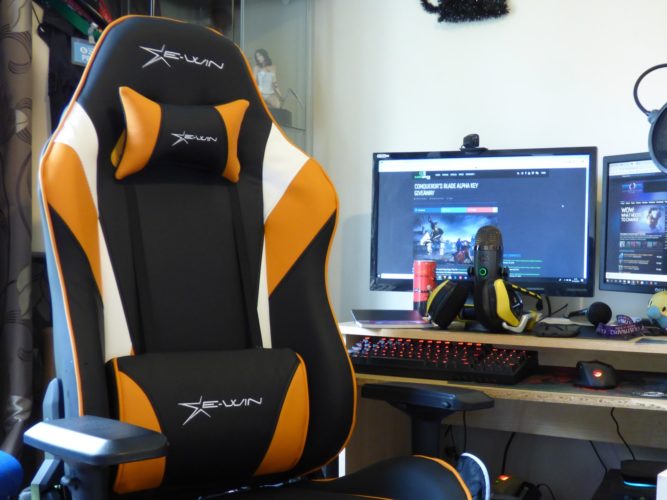 It wasn’t all that long ago that Steve took a look at one of E-Win’s Champion Series PC gaming chairs and now, I’m going back for a look at a slightly different version of the chair turned at least one of our team into a “chair snob”.

Originally an OEM furniture manufacturer, E-Win Racing has been around for a few years now. Since 2016 they’ve been wheeling chairs into our homes and offices that will certainly get you noticed. As Steve pointed out in his review of the all black Champion chair, E-Win’s prior experience is hardly limited to the gaming market, so they really ought to know a few things about keeping people comfy. Four series of chairs are already available to suit a variety of players. These include the Champion, Calling, Hero, and Flash Series.

The Champion line of chairs comes in at $289.00/€249.00/£221 with some mild variation based on design choice. My particular test sample currently retails for £249 on E-Win’s official site. This lands a substantial discount when compared to something like the Noble Epic. While this particular model might be part of the same line as Steve’s previous Champion series review, there are a few noticeable differences. 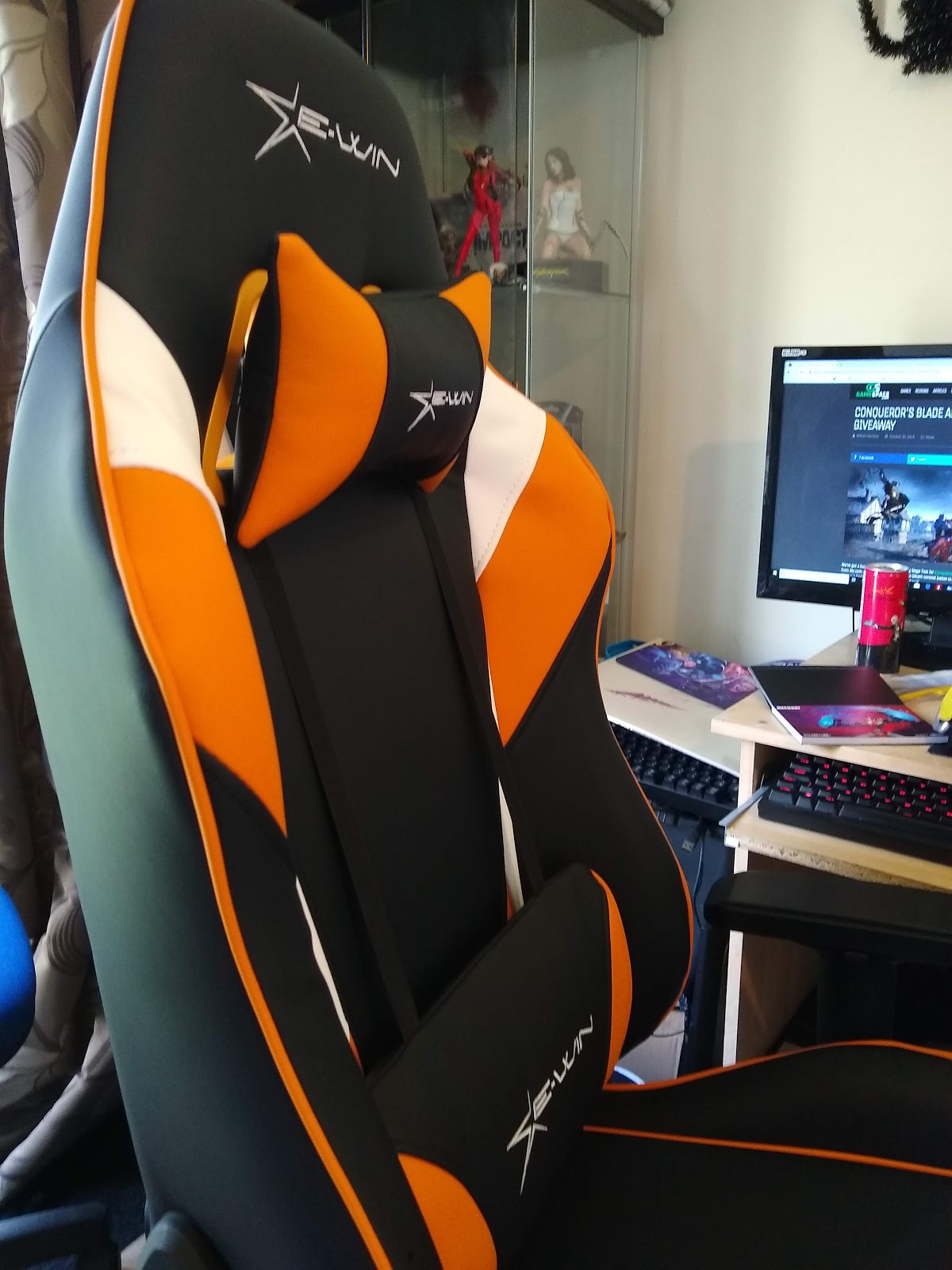 Getting this monster dumped on your front doorstep is a little intimidating for anybody who’s not had an opportunity to put together a gaming chair before. Thankfully, E-Win impressed right out the box. The Champion Series is packed with a fairly minimal amount of superfluous wrapping. Instead, you’ll find the chair is snugly fitted into the accompanying package, and extremely easy to extract. Anything smaller than the base is boxed away to prevent a side quest to find the correct screw head. Components are correctly parcelled into appropriate packages and E-Win even throw in a pair of rubber tipped gloves to make things a little easier to handle. The forethought E-Win put into the packaging speaks volumes about the way the Champion series is built and makes the assembly as painless as it could be, even for an IKEA-phobe. 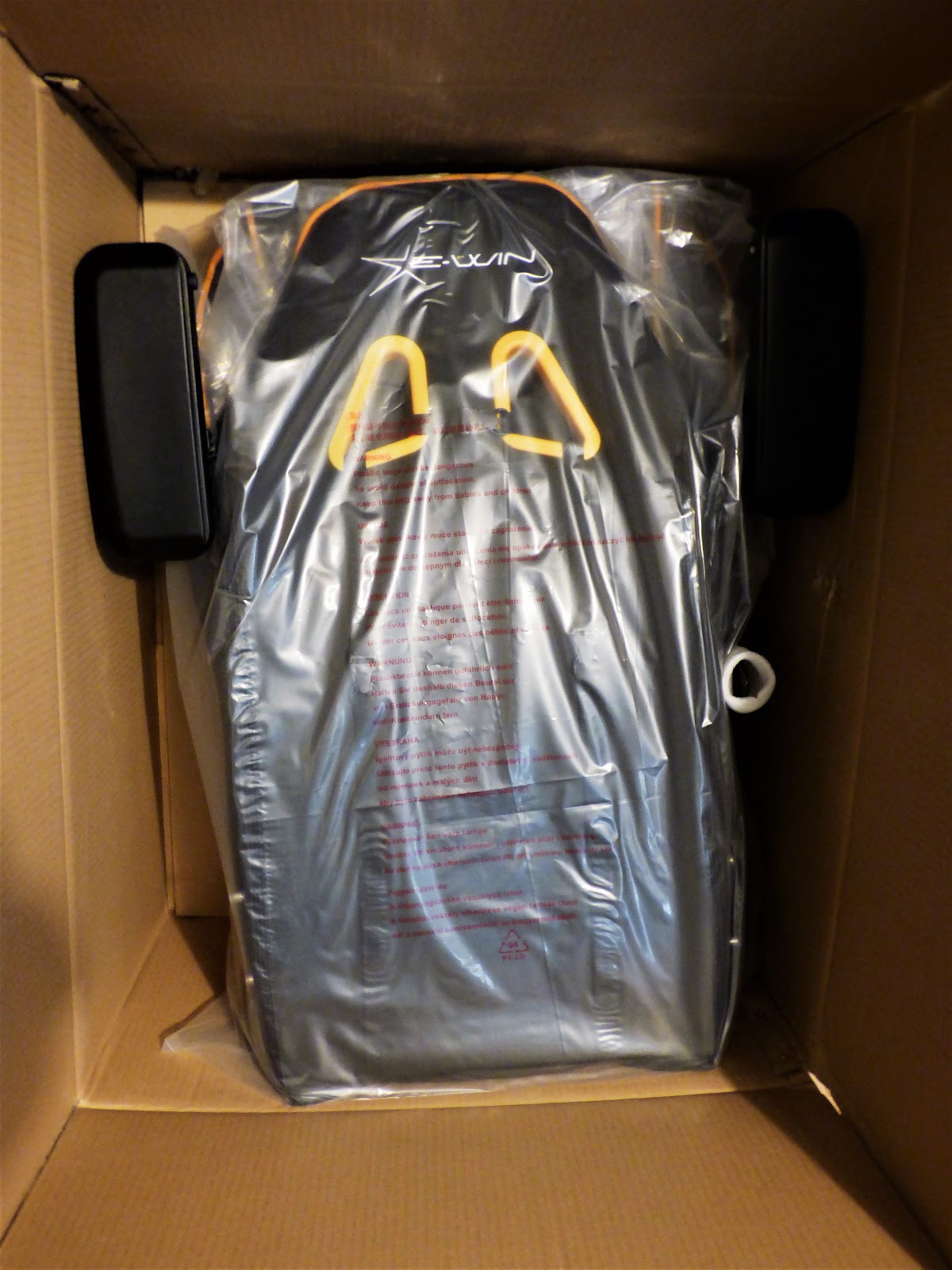 After around 15 minutes you should find the E-Win series up and running. Putting the pieces of this chair together is, in my experience, simple enough and the result feels satisfyingly solid. A total of ten hex headed screws are all that is needed, alongside a little lifting, to put complete the Champion series build. The entire frame is intended to hold up to 150KG, so handles my paltry frame of around 60KG without any issue. Putting my own posterior down, this E-Win chair feels roomier than I’ve become accustomed to, even compared to other gaming chairs. The Champion series is not the largest chair on the market. It is not even the biggest seat in E-Win’s own range but it is still sufficiently generous to accommodate my 180cm frame easily. While other furniture sometimes falls a little short when it comes to my back and neck, the E-Win Champion series is tall enough that it always provides a level of functional support, especially when compared to more entry-level options. 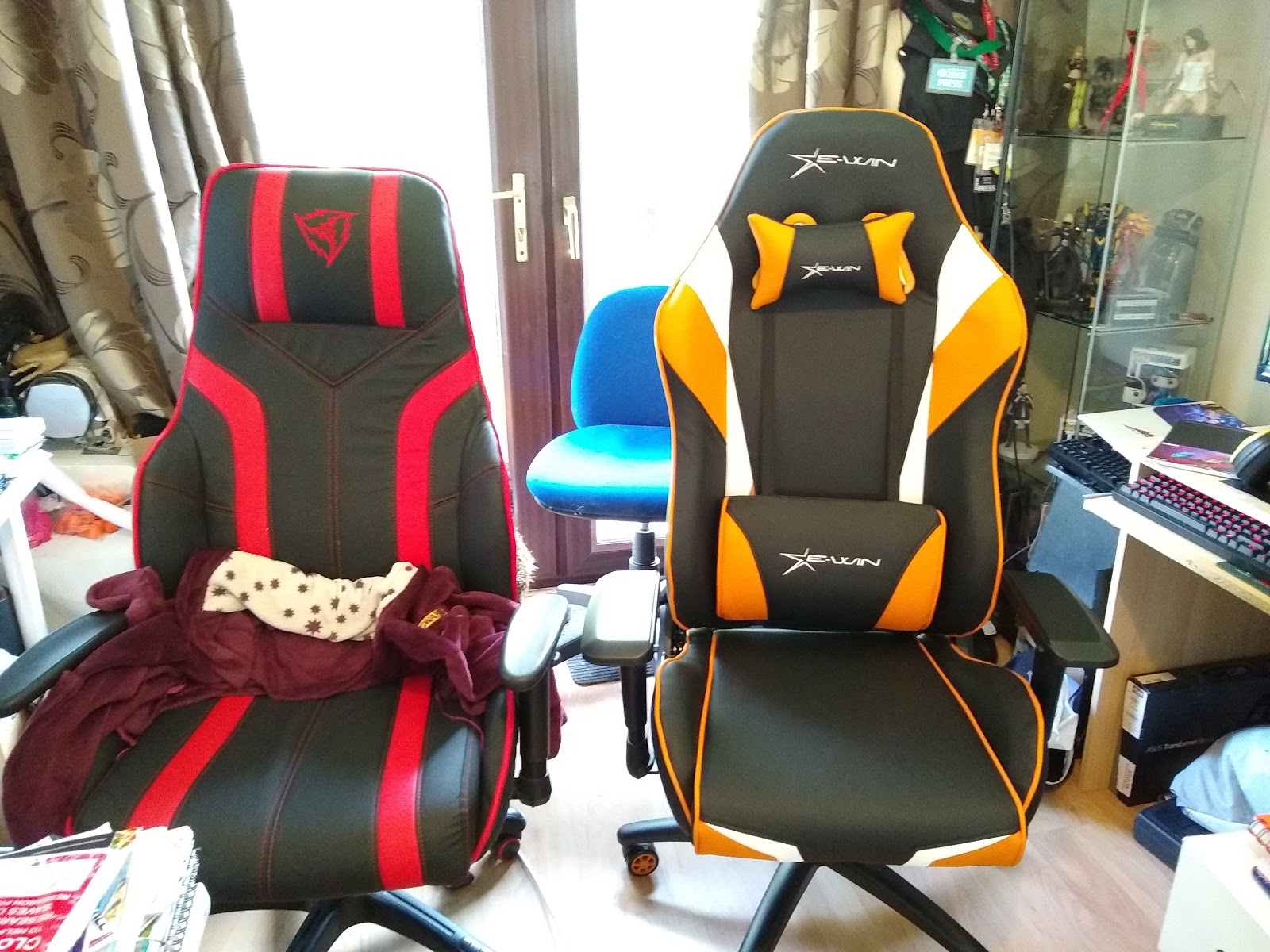 The addition of a lumbar support and adjustable neck cushion to the E-Win Champion is another nice touch that elevates the series above my own personal comparisons and entry-level chairs. These cushions are fully adjustable, or removable if you need to readjust them. Cushions might sound like an unnecessary option but they are an addition that I didn’t even know I needed until I had them. The Champion series neck cushion is not the only adjustable area of this gaming chairs The 4D movement of the attached armrests allows gamers to elevate, slide, and rotate the armrests to a silly number of configurations. The rotation, in particular, of these attachments, allows them to do more than just go up and down or forward and back. It gives me real room to get the Champion Gaming chair where I actually want it, rather than settling for where it best fits among my desk clutter. 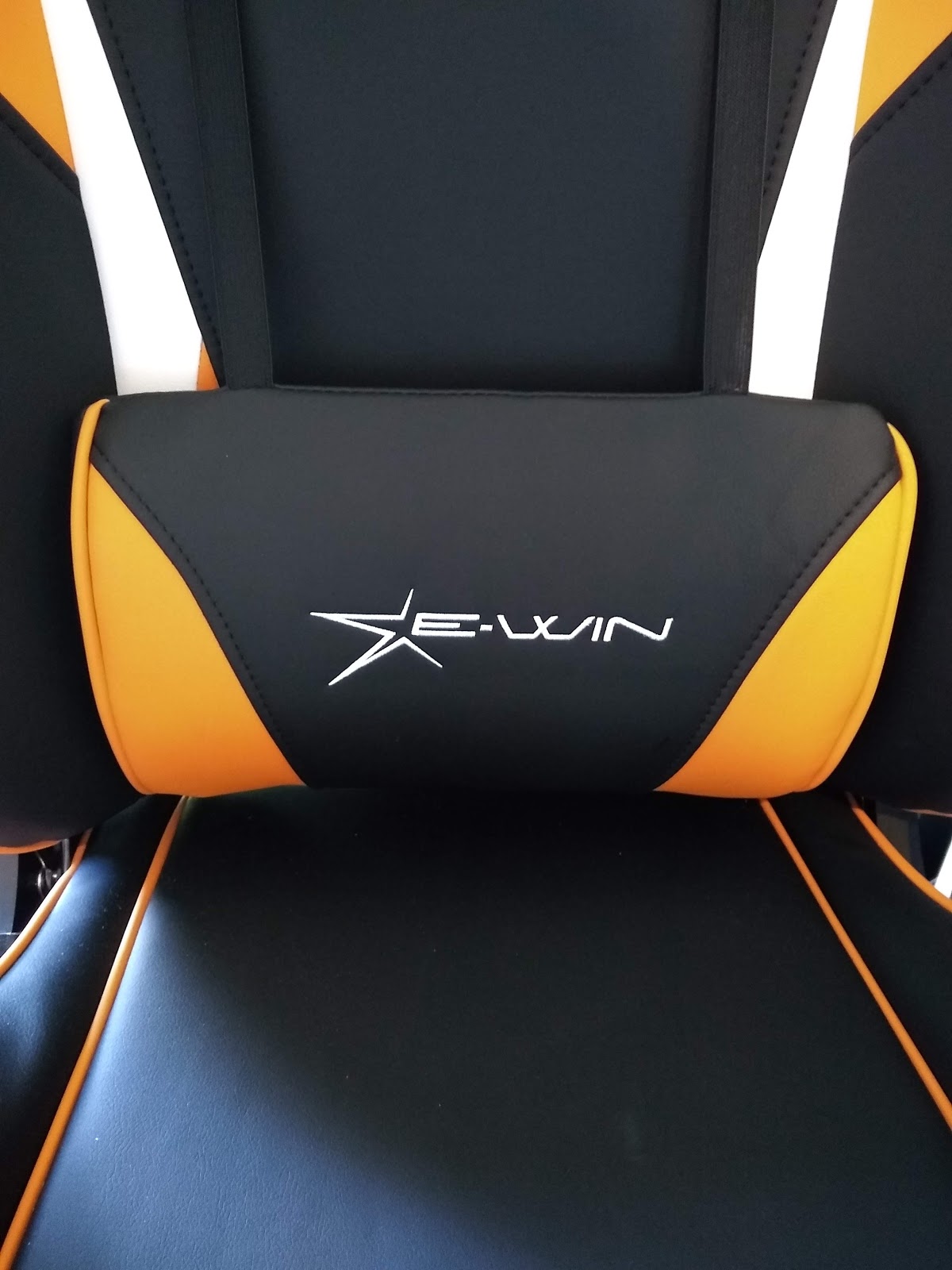 As if that wasn’t quite enough choice, E-Win has included a reclining feature to the Champion series that allows it to throw back anywhere from 85 to 155 degrees. That’s pretty much enough to sleep on if you so wish. From a functional standpoint, this gives the E-Win room to recline to your own preference and utilizing the reclining feature is as simple as pulling a lever located on the side of the chair. It’s simple and safe. All the moving component are guarded by chair’s side covers and the entire thing feels solid when you kick back. Let’s be clear though, 155 degrees is an extreme and nobody needs a chair that they can sleep on. However, I really could take a quick nap on this if I felt like it.

The E-Win Champion series gaming chair is an impressive piece of kit. The chair’s cold molded foam and multi cushion design create a wrap around that provide support from every direction. The quality of the material and stitching here feel as solid as the steel frame, while the configuration options are excellent. Construction was easy, while some impressive design and packaging features meant that I didn’t waste my day deciphering instructions. All in, and the color aside, E-Win continue to produce a line of chairs that impress for the price. While this might not come with the street cred of a Noble, you’re going to be indoors. If you want a quality gaming chair that will let you kick back in front of your rig then the E-Win Champion series is it.