Just like with most gaming peripherals like keyboards, mice, pads, headsets and even LCD screens ergonomic bucket chairs have also flooded the market (perhaps a little faster than we were expecting). However although there are countless models for people to choose from that have different shapes, features and colors there aren’t that many actually aimed towards larger people and that’s not really hard to tell since out of our 12 gaming chair reviews only 2 are really aimed towards such consumers. Now as many of you are well aware currently most gaming peripherals manufacturers have released such products and although not all of them actually make their very own gaming chairs (thank OEM manufacturers for that) it still would be best if such models were not as hard to come across. EWin Racing may not be the very first gaming chair manufacturer to come in mind but they offer an entire line of gaming chairs designed to cater to the needs of larger people called the Flash Series XL and with us we have their brand new black and red model.
EWinRacing Chair was newly founded in 2016 after being a leader OEM office chair manufacturer. With the development in design and research, we strive for a professionalization in gaming chair field. Even more in order to bring you a healthier and relaxing environment we will continuously pursue humanism in design and manufacturing ergonomic gaming chairs. What’s more our strict quality inspection process and standard ensures you a better chair for better life. Visit www.ewinracing.com for more information on our products.

What makes the Flash Series XL stand out from most gaming chairs in the market today is its target audience since its frame was designed for people up to 2 meters tall and 300Kg heavy (89cm tall backrest with 57cm wide seat). Unfortunately although the Flash Series XL line does feature a reinforced steel frame (15mm in thickness) since it uses the same class-4 gaslift as with the rest of their models the maximum supported weight (seat/backrest included) is actually no more than 150Kg. Other features include a PU leather cover, foam density of up to 60Kg/M3 (obviously for the seat), 4 directional adjustable armrests (height/position/orientation), removable head and lumbar pillows, 70mm nylon caster wheels (EWin says 3 inch ones but these are actually 70mm and not 75mm in diameter), backrest adjustment (up to 155-160 degrees) and the somewhat classic tilt/rocking (up to 12 degrees) and height adjustment mechanism we find with most desk chairs. 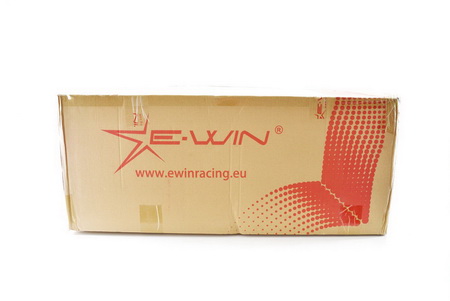 EWin Racing ships the Flash XL gaming chair inside a large box that has their logo on all sides. 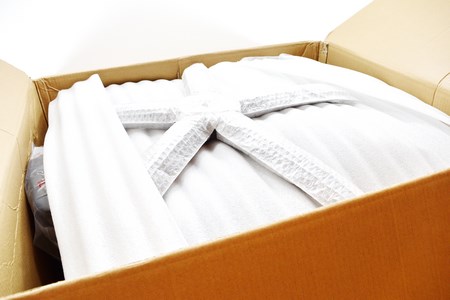 The chair parts were packed extremely well as you can see from the above picture. 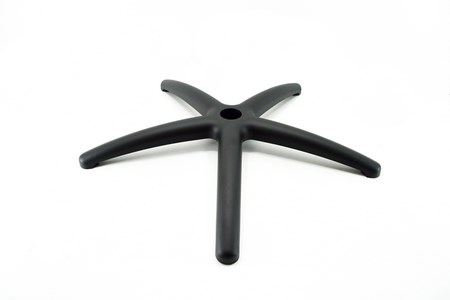 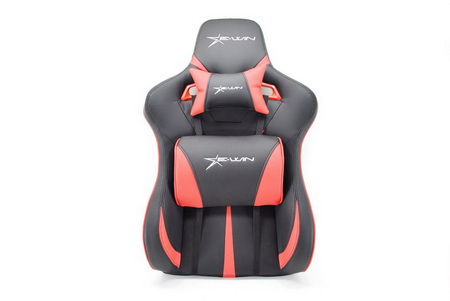 The 5-star aluminum base was placed at the top of the box so we took that out first followed by the backrest which has both removable pillows attached. 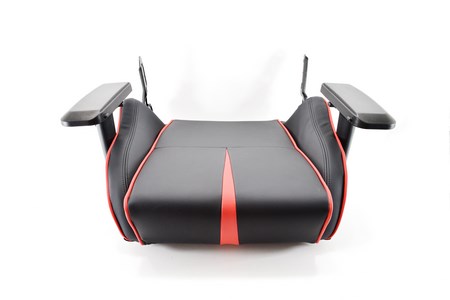 The large seat was next (the 4D armrests are already attached). 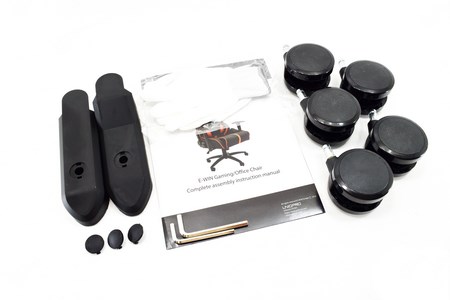 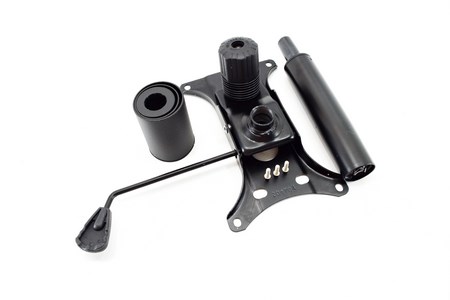 EWin packs the typical butterfly tilt/rocking and height adjustment mechanism with the Flash Series XL so that came out next along with 3 Allen screws and the class-4 gaslift with its plastic cover. 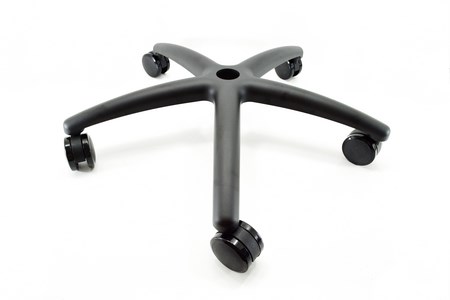 Once again we started assembly of the chair by mounting the 70mm caster wheels to the 5-star aluminum base. 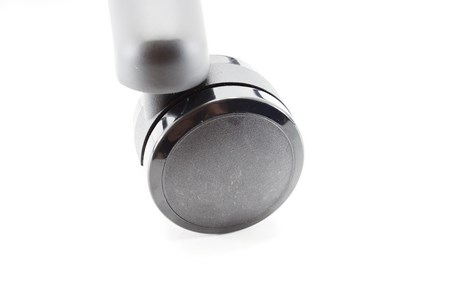 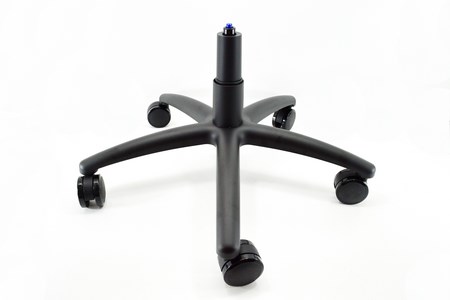 Placing the class-4 gaslift with its plastic cover on the 5-star base was the next step. 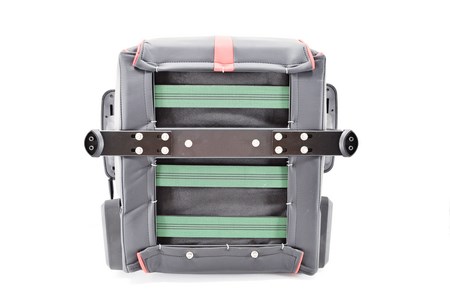 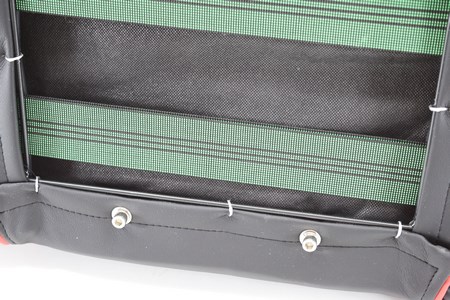 The base of the seat has a total of three green elastic bands for increased support. 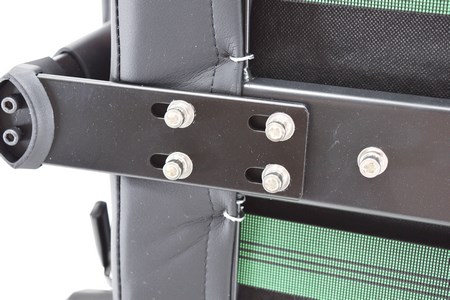 As you can all see each 4D armrest is attached to the seat with no less than 4 Allen screws. 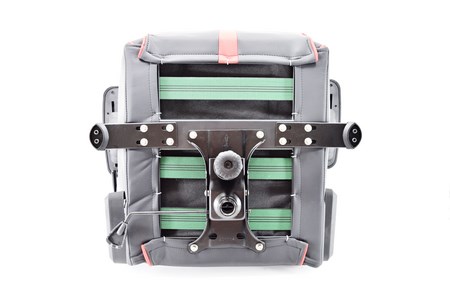 Mounting the butterfly mechanism requires a total of 4 Allen screws as seen above. 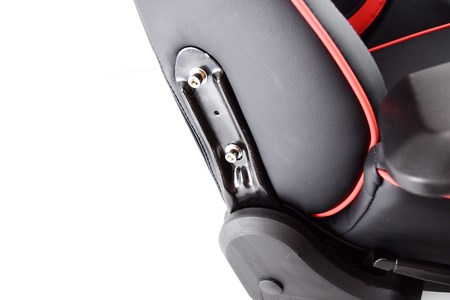 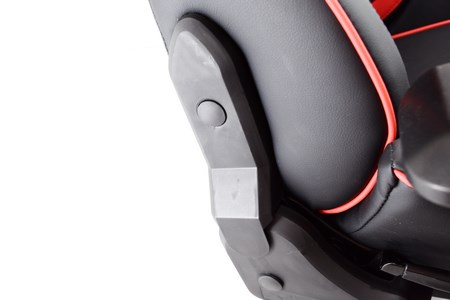 After that you will need to place the plastic covers and the screw taps again as seen above. 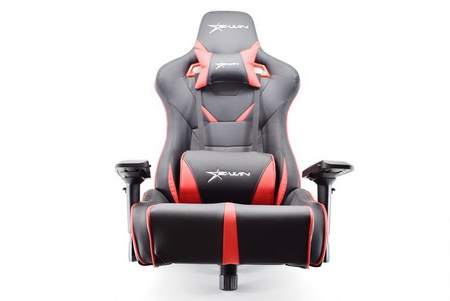 The upper body is now complete and I have to admit that it looks very nice.

The Flash Series XL gaming chair looks very good and is actually among the top 3 chairs to arrive in our lab with as much foam density. 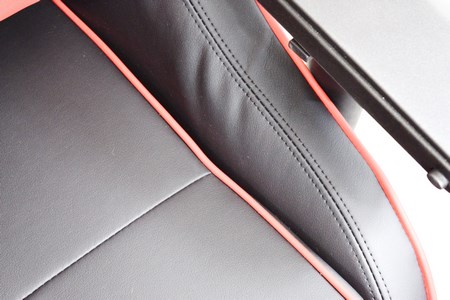 The PU leather used may not compete with the one used in the X-Comfort by Thermaltake or with the one of the EPIC by Noblechairs but it’s still very good. 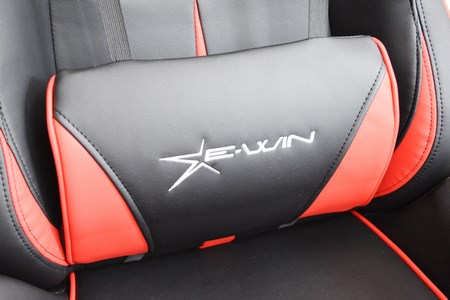 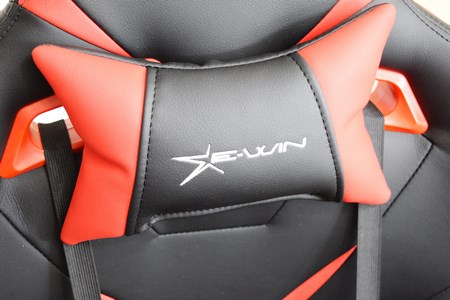 The company logo is placed on both the head and lumbar pillows. 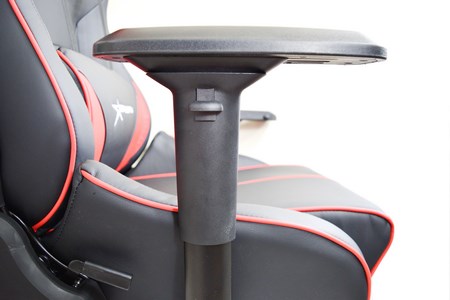 The armrests can be height adjusted from 29cm all the way up to 36.5cm. 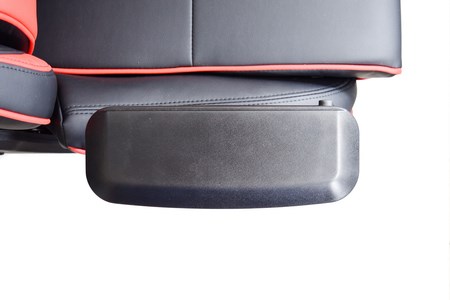 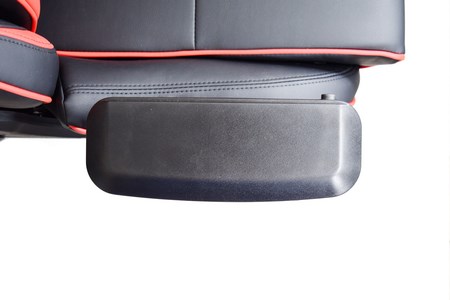 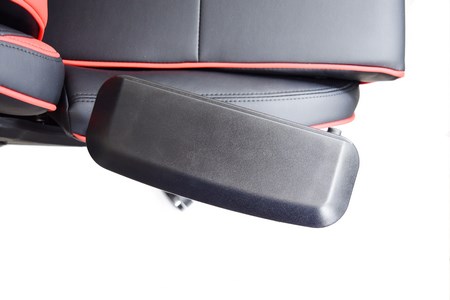 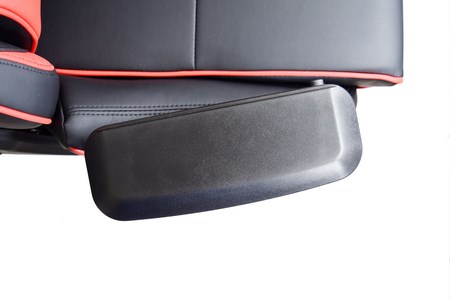 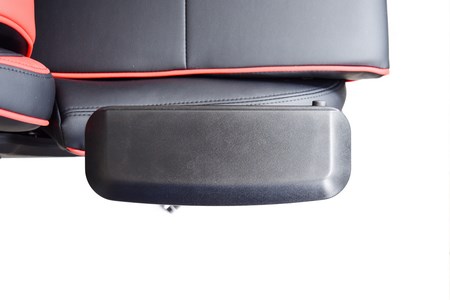 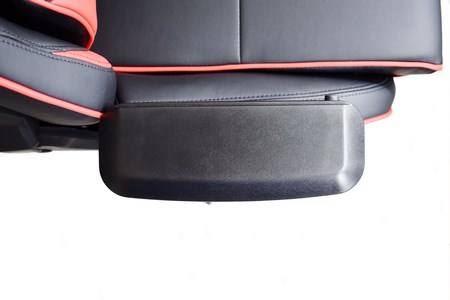 Just like all 4D armrests the top can move forward, backwards, left, right and diagonally to suit your style.

This is the rear of the Flash Series XL gaming chair.

EWin uses a head pillow that features a clip, not something we see a lot.

Although the backrest doesn’t fall all the way (180 degrees) still it does fall up to 155-160 degrees and thanks to the good amount of padding it’s very comfortable.

We first heard of EWin Racing quite recently but after checking their Flash Series XL gaming chair we have a pretty good idea as to why they’ve been the OEM go to manufacturer by some popular gaming peripheral companies. You see the Flash Series XL is not only one of the two largest gaming chairs to ever reach our lab but it also features a very good level of quality, plenty of padding (foam density), large caster wheels, reinforced steel frame, 4D adjustable armrests and its backrest can drop up to 155-160 degrees. Unfortunately by using the classic butterfly tilt/rocking mechanism the chair doesn’t feel as sturdy as it would had EWin Racing used the Z-support tilt/rocking mechanism found in many high-end models so we really hope they will eventually start using that as well. Oh and did we mention that the Flash XL series is available in several different colors and designs? Check the above picture for some of them.
EWin Racing claims that their chairs are affordable compared to their competition but after checking the price tag of the Flash Series XL Gaming Chair it doesn’t seem to be quite right (some of their other models however are quite affordable). To be more specific you can currently get the Flash Series XL model for USD429 inside the USA (EWin USA) and 389Euros inside the EU (EWin EU) a price tag which is not that far off from let’s say that of the X-Comfort by Thermaltake. The good news is that the Flash Series XL is taller, wider and has more padding than most models we’ve received so far thus it’s more ideal for large people so at least for them this is the obvious way to go. Overall thanks to its size, foam density and features the Flash Series XL gaming chair is actually a very good choice for large people which is why it gets our Golden Award. 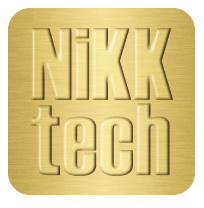